Free things first: I've got parts for 20 copies of the "Mk I" XOrduino and XO Stick. I'm mailing them out for free (!) in exchange for your development help. Send me an email at xorduino@gmail.com describing what you'd like to do with the XOrduino/XO Stick, and your full mailing address. Best 20 or so get kits. 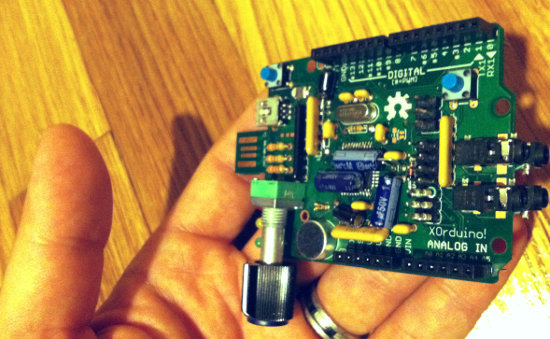 Here are some of the projects which you might be able to help with:

Here's the exciting part two: I'm already working on the XOrduino and XO Stick "Mk II". The latest schematics/boards are in github (xostick, xorduino). The kits I'll be sending out this week correspond to the "A1" tag in those repositories; the "Mk II" revision is on the master branch.

The XO Stick gets a minor change with big implications: instead of using a 20-pin header matching the ATtiny861 pinout, I've widened the board to give the XO Stick a standard Arduino shield connector (and some prototyping area). This opens the way for a port of the Arduino IDE (mentioned above), but it also means that the XO Stick can be mounted on top of an XOrduino. In a cost-conscious classroom environment, this allows a teacher to buy/make one copy of the XOrduino with all of its fancy peripherals (scratch sensors, robot support) and then give each student a copy of the cheaper XO Stick. The students share the XOrduino and swap out their XO Stick "brains" on top to control it or use its peripherals. Mating the two boards also makes it straightforward to program an XO Stick from an XOrduino, or to use the XO Stick's prototyping area to hack together a shield for the XOrduino.

The XOrduino gets a more exciting feature (hinted at above) -- enough peripherals to become the XO Turtle Bot! This is a very low-cost turtle robot based on a Tamiya motor assembly. All of the extra robot components are optional—you can populate just the parts you want—but a classroom can now make their XOrduinos (or XO Stick + XOrduino base) into standalone turtle robots, controlled by Scratch, Turtle Art, or Arduino code. The XO Turtle Bot revision adds a motor driver, two bump switches, a simple 3-cell power supply, and rotation sensors for the motors to the XOrduino. (Arnan Sipitakiat and Nussarin Nusen in their Robo-Blocks presentation for IDC 2012 explained that children find "turn for two seconds" hard to understand; we include motor sensors so that we can "turn 90 degrees" instead.) And of course because the robot is based on XOrduino, you can add whatever other sensors you like and write arduino/Scratch/Turtle Blocks code for it. 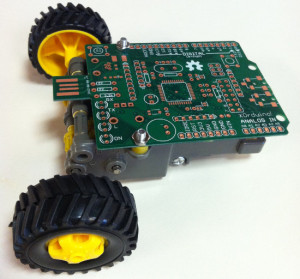 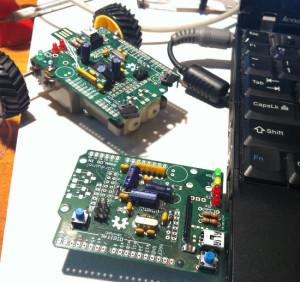 I'm excited about the potential of low-cost robotics and the Arduino platform for education. If you are, too, let me send you a kit so you can help out!